On August 12th, Popeyes released their first-ever chicken sandwich. And let’s be honest, it’s pretty unbelievable how they managed to stir up a controversy that led to exponential growth.

Popeyes sold over one-thousand chicken sandwiches per store before they sold out.

Want to be first to know when it’s back? Download the Popeyes app and turn on push notifications.

Just a few social media posts, word-of-mouth, and a sold-out sandwich made Popeyes rise to the top. On the surface, you may think Popeyes made a great sandwich and got lucky, but that’s only half the story. In this post, I’m going to unpack the full Popeyes Chicken Sandwich Marketing Campaign.

The Perfect Recipe for Growth

Imagine the Popeyes marketing team sitting around a conference table thinking of the next big thing. They probably did what any marketer would do, they looked into their competitors, which in this case were fast-food chicken companies.

Guess who rules the fast-food chicken industry? If you said Chick-fil-a, you’re right! They absolutely dominate and we can certainly assume that Chick-fil-a was targeted by Popeyes in their social warfare campaign.

Not only was Chick-fil-a trending based on Google Trends, but they also gained a ton of followers on social media. Below is a screenshot from SocialBlade which allowed us to get further social growth insights. It’s obvious that Popeyes is much further behind Chick-fil-a but they totally catapulted forward on the backs of Chick-fil-a which is a huge marketing win. 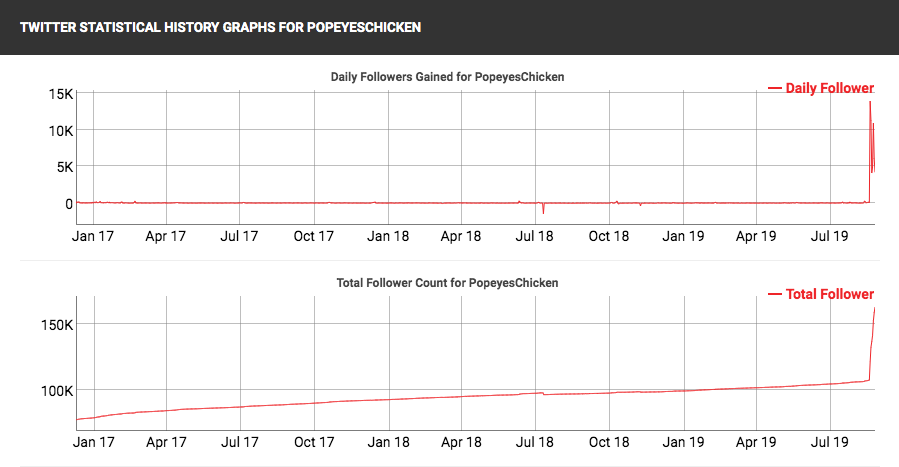 Popeyes had the perfect recipe for growth, here’s exactly what they did:

Lessons from Popeyes vs Chick-fil-a Feud

We can all learn so much from the Popeyes chicken sandwich marketing campaign. When the Popeyes sandwich was first released the drive-thru lines were not a hazard and the internet was not losing their minds.

What changed and why did the sandwich go viral? Well, it all started with this tweet:

Chick-fil-a tweeted about their chicken sandwich “Bun + Chicken + Pickles = all the ❤️ for the original.” which felt like a jab at Popeyes. This basically gave Popeyes all the ammo they needed to get on the map with one simple reply.

In reply to this tweet, Popeyes wrote “… y’all good?” which planted a seed of doubt on whether or not Popeyes chicken sandwich was better than Chick-fil-a. So in other words, people started comparing the sandwich to Chick-fil-a, the gold standard of Chicken Sandwiches.

This tactic allowed Popeyes to inadvertently ask chicken sandwich fans which one is better, garnishing them either first or second place as the best fast-food chicken sandwich.This approach was natural and didn’t feel forced which is why it worked.

The chicken sandwich sold out in two weeks and since it was supposed to last until the end of September, Popeyes Chicken Sandwich won’t be back until October at the earliest.

Apex Marketing Group estimated that Popeyes was able to get over $65 million in free PR as a result of the chicken sandwich social warfare.

Popeyes hasn’t had marketing like this since the movie Little Nikki back in 2010. This was a great way to get people talking about Popeyes and people still quote this movie to this day and yes, Popeyes is the shiznit.

Let’s take a deeper-dive into what Popeyes did to get $65 million dollars of free PR.

No one ever thought selling chicken could start beef, but that’s exactly what Popeyes did with their new chicken sandwich.

Let’s be honest, when Popeyes called out Chick-fil-a with the “…you good?” tweet, it was a total stretch.

Most tweets from large entities are pre-written weeks before and scheduled using an app like Buffer.

That being said, Popeyes made a Chicken Sandwich and found the first opportunity to start beef with Chick-fil-a.

Popeyes then called out others, like Wendy’s saying “Sounds like someone just ate one of our biscuits. Cause y’all looking thirsty.”

Sounds like someone just ate one of our biscuits. Cause y’all looking thirsty. https://t.co/89eqI5vk2z

Most people heard about the Popeyes vs Chick-fil-a from a hipster or early adopter.

These two types of individuals love to let you know they tried it while it was trending or before it was cool.

It’s an important tactic to rally the hipsters and early adopters when launching a word-of-mouth campaign.

Hipsters will most likely lean towards Popeyes because it’s edgy to choose the underdog and early adopters feel special for trying it before it was sold out.

These are the same people camping outside of the Apple store.

Popeyes tapped into Chick-fil-a’s audience by planting a seed of doubt. Regardless of the outcome, which sandwich is better?

As marketers, it is important to target a market that already enjoys similar products. With social media, we basically have a little black book full of our competitor’s fans that we can reach with our own campaigns. 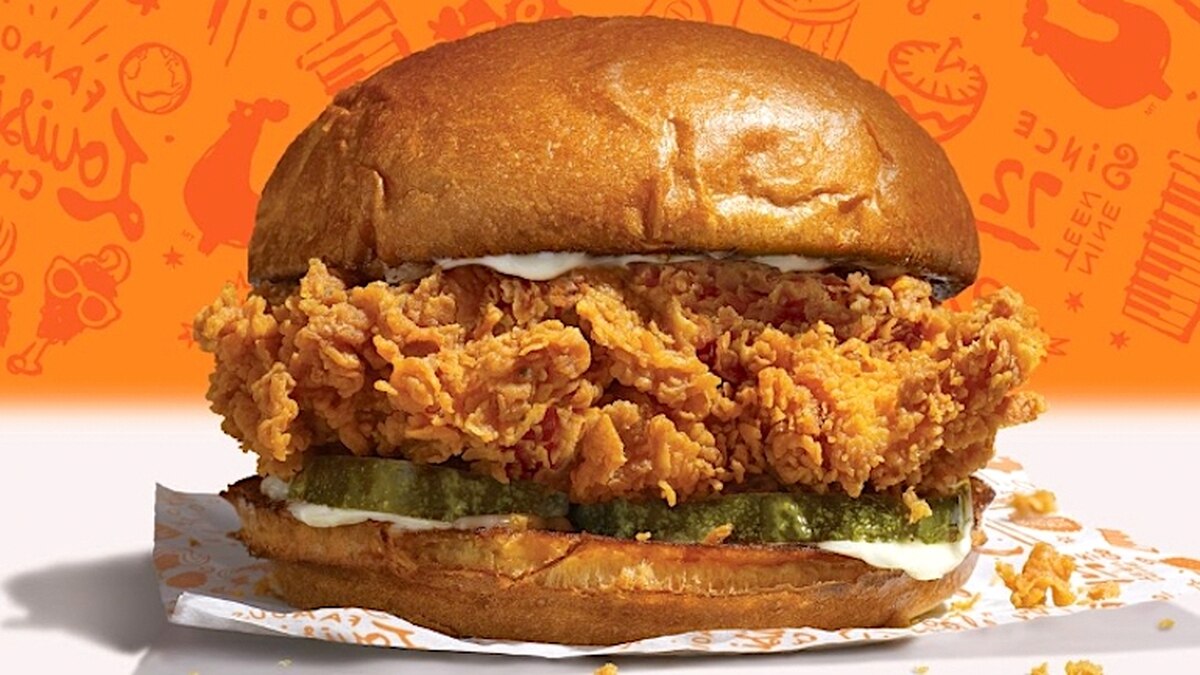 Let’s not overlook the photography of the sandwich and overall attractive orange graphic used for promotion which plastered all across the internet.

This is by far the most critical aspect of the whole campaign, the sandwich looks picture perfect (excuse the pun) in the photo.

Most individuals that waited in a 30+ min line to get the sandwich before it sold out commented on the fact that they came because of the photo.

A photo can basically sell a product for you, don’t be cheap when it comes to product photography.

Here are a few tips to help you take better product photos:

Developed a ✅ Great Product (aka sandwich)

The sandwich Popeyes released is delicious.

If you are not selling a good product, no one will be talking about it.

This is an important lesson for those who try to sell garbage, just focus on a good product and the rest will come naturally.

That being said, the marketing tactics Popeyes used that we are outlining wouldn’t be possible without a good product.

Got a S#!t Ton of Testimonials ? 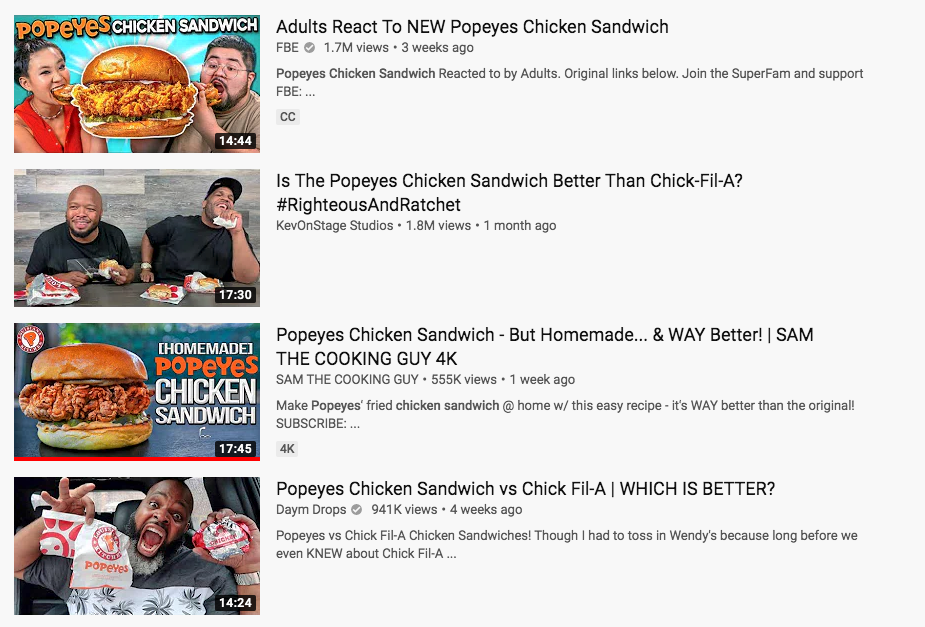 Anyone can write a review about a product.

What you want is a person with a personal story to write about why they wanted your product.

People want to hear a story, not an empty thumbs-up review with little information on who is reviewing the product.

Testimonials provide the most effective organic results, especially when you make a damn good sandwich.

We have found that sharing a screenshot from social media of a testimonial converts more visitors into customers.

The product shortage was actually a good thing.

Any smart marketer knows that if something is sold out, it’s basically social proof for the rest of the world.

When Popeyes tweeted that it was sold out, it only made people want the sandwich more.

Naturally, we all feel like we missed out on something that everyone enjoyed and when we had to wait longer we wanted it even more.

So how did Popeyes leverage the hype of a sold-out sandwich that people were impatiently waiting for?

Popeyes instructed people to sign up for their mobile app to get notified when the sandwich is back.

People signed up, which gave Popeyes direct access to push marketing updates to their phone or email.

This my friends is how you leverage hype to build a massive list.

Let’s break this into 4 actionable steps you can take right away.

If you were to shake your magic 8 ball, it would probably tell you to ask again later or that it is very doubtful.

The way I see it, this was a fantastic run for Popeyes and they are killing it, but people are becoming more aware of the crap they put in their bodies and let’s face it, this Popeyes Sandwich is bad news for your health.

Another important point to make is that Chick-fil-a employees seem happier and they have a streamlined process, which makes for a better experience.

Popeyes has gained more followers and built a nice list to market to in the future but it’s going to take a whole lot more to dethrone Chick-fil-a.

Is this another PR stunt? ? 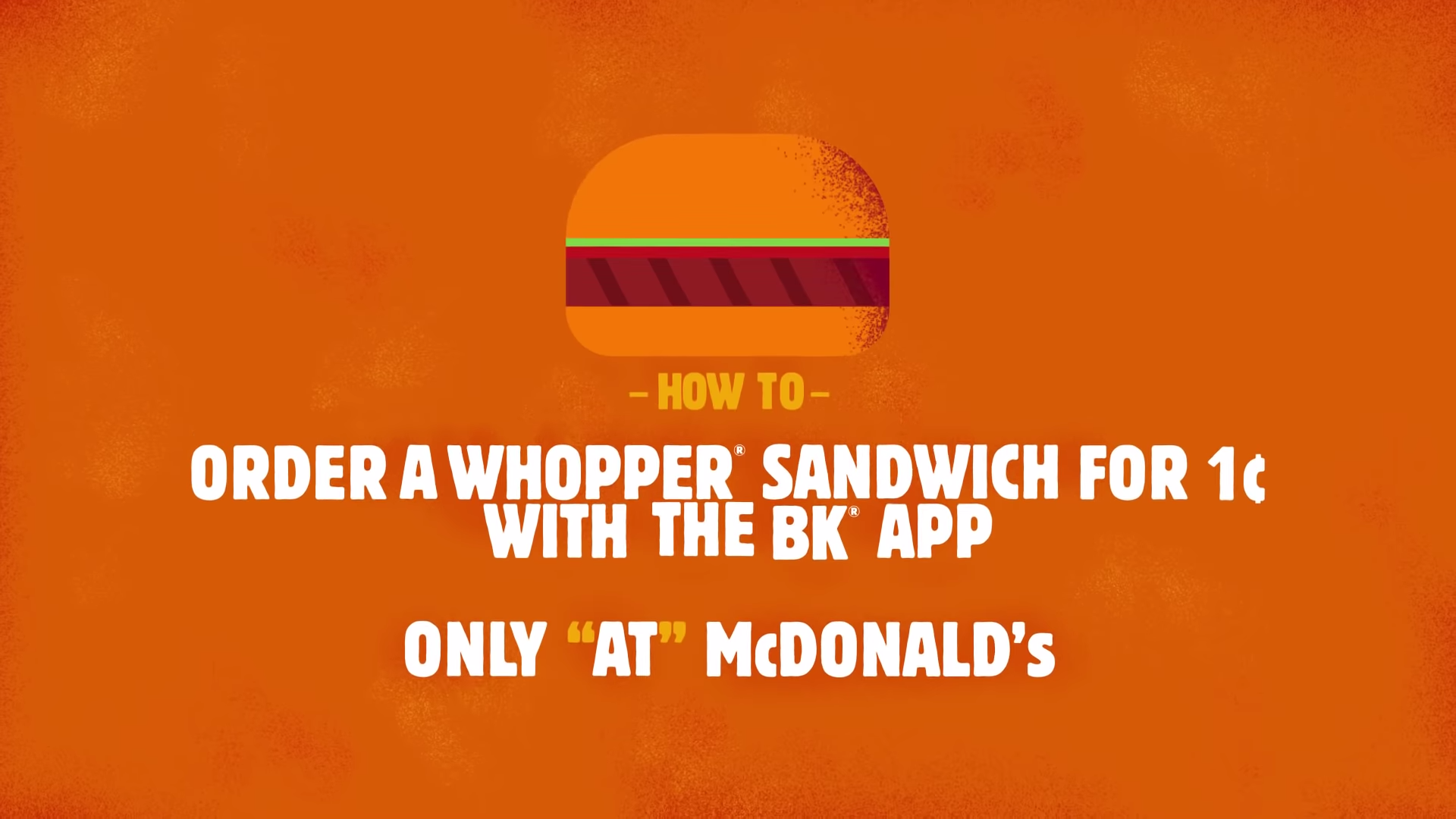 Did you guys know Burger King is a Popeyes sister company? Remember the BK Whopper Detour PR stunt, when Burger King stirred the pot by offering 1¢ whoppers by ordering from McDonald’s?

This was basically a spit in the face for McDonald’s and it did get people talking about the feud, so of course, Popeyes would stir the pot.

The hype continues to build as people await the return of the Chicken Sandwich, but is the “sold out sandwich” another PR stunt?

During a recent CNN interview with Jose Cil, Popeyes big boss man, Jose says “it’s a math problem and we are trying to make sure we have enough chicken” and goes on to say they added a check box for breaking the internet, for next time.

Recently, they said it wasn’t the chicken, it was the lack of brioche buns .. so which is it Popeyes?

Do you think Popeyes really sold out? Or do you think they want to build momentum and get people to sign up for their app aka get as many people on their list? Let me know in the comments below.

Disclosure: This post may contain affiliate links. This means I could make a commission from your purchase.

Drew has spent years building software, selling physical products online, and providing expertise to companies such as Disney, Paramount Pictures, and many more. Throughout his career, Drew has learned extremely powerful marketing and SEO strategies that have helped him increase traffic and acquire more customers. 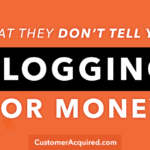 What They Don’t Tell You About Blogging For Money [TRUTH] 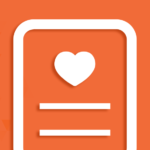 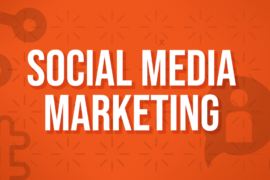 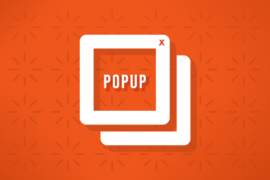 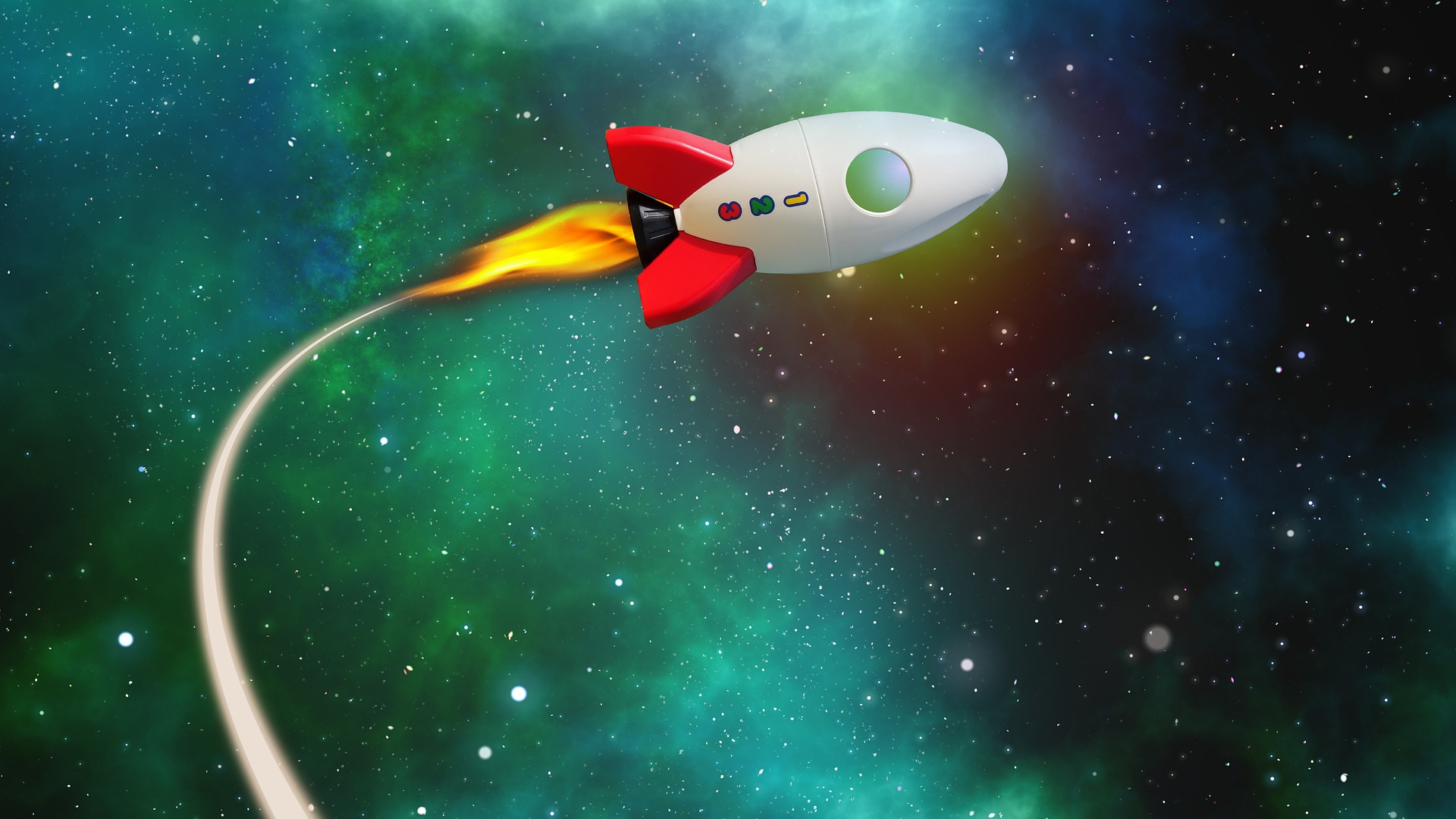 Learn how to reproduce my content creation strategy and how to write blog posts that rank higher.